If you take the path from the Catholic parish office to the so-called Rollgraben today, you will soon come across the Ulrichsturm. It is the last fortification tower of Göllheim that is still preserved.

At the beginning of the 15th century, a town fortification with a moat, five towers and two gates was built around Göllheim to protect the town: In addition to the Ulrichsturm, there was the "Barbaraturm" (located about 100 m northwest of the Ulrichsturm), the "Rupslederturm" (on today's Freiherr-vom-Stein-Straße, south of the Dreisener Tor) and the "Turm am Gottesacker", on the corner of Dr.-Fritz Eidt-Straße) as well as another tower on today's Weedgasse. 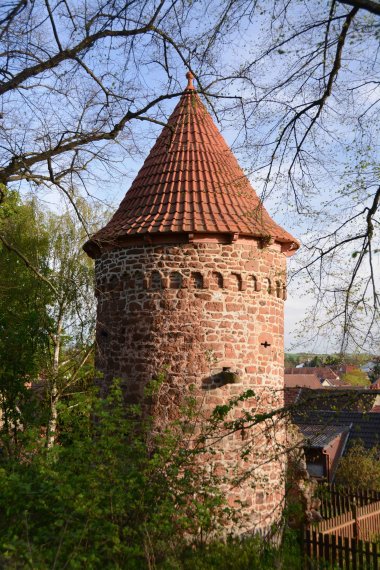 The Ulrich Tower is a three-story round tower made of red sandstone of different sizes. In the lower part the masonry is pierced by seven embrasures (alternating mouth and key embrasures), in the upper part by a key embrasure and a pointed arch window. The tower ends with an arched frieze.

An exact year of construction cannot be determined for the Ulrichsturm, but a rough chronological assignment for the first half of the 15th century is possible via the embrasures: there are key embrasures in the form of an inverted keyhole and horizontally placed muzzle embrasures. They refer to the use of crossbows as well as firearms, which became increasingly popular during the 15th century. The type of construction - round tower as part of a fortification - was common until around 1500.

The Ulrich Tower would probably not have withstood a siege by troops, because behind the tower a hill rises on the field side. It is more likely that the structure was intended as protection against looters.

In the 1960s, the Ulrichsturm was in danger of falling apart; it was stabilized with an inner corset of concrete. Since the summer of 1989, the Ulrichsturm has once again had a roof: the conical shape harks back to historical models.