The "Zellertal Memorial" stands on a group of rocks about five meters high in the district of "Zeller Schwarzer Herrgott". Directly on the panorama road between Mölsheim and Zell, today's landmark of the Zellertal bears witness to the public spirit of the villages of Einselthum, Harxheim, Niefernheim, Zell, Mölsheim and Wachenheim. The idea for the construction was born soon after the First World War.

The final push for the construction was given by the Niefernheim mayor Georg Herr in a meeting on September 18, 1926, "to erect a common memorial for the Palatine and Hessian fallen, as they fought and died together in enemy territory, which at the same time would also express the unity of the Zellertal". An architectural competition was announced with about 80 submitted designs, of which four proposals were shortlisted.

The contract was awarded to Alfons Brandt, a graduate engineer from Worms, and the monument was erected by the Mölsheim construction company Philipp Obenauer and Son. This resulted in a pillared hall consisting of 6 pillars, one for each Zellertal community, made of "hammered" Albisheim limestone. 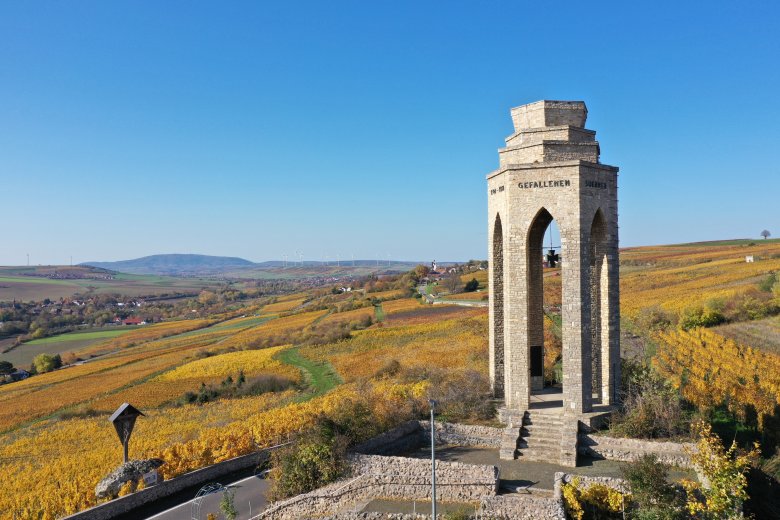 The inside of each pillar bears a bronze plaque with the names of the fallen of the respective municipality. A cross hangs in the upper part of the hall and the pillars open into a flame bowl lined with chamotte stones. Staircases on two sides lead to a small forecourt.

The monument was officially inaugurated on July 15, 1928 "with processions at 1:30 p.m. from Zell and Mölsheim, various ceremonial speeches and illumination of the monument in the evening, fireworks and torchlight". Due to its special location, its open-worked, upwardly directed shape and its height of 15 meters and a diameter of 6.50 meters, it still has a special long-distance effect today.

Every year on the "Volkstrauertag" in November, representatives of the Palatinate and Rhine-Hesse sides of the Zellertal communities meet there to lay a wreath and say a prayer in remembrance of those who died in the Great War. Not only in the dark season is the illuminated monument the perceived center of the valley.